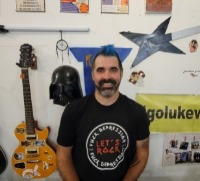 Richard Wygand was a sensitive child and the lack of understanding of his sensitivity lead him to an enormous existential crisis. Therefore at the age of 24 he went on a search of the meaning of life. Richard embraced the solitude of a long distance runner as he became a professional triathlete. After years of convectional and non conventional therapies and 18 ironmans later he finally found himself, and his purpose. At 36 years old, 2 weeks before his first son, Luke, was born Richard decided to change his course in life got his guitar to do something his always wanted to do: ART!

After becoming a Reiki Master and, inspired by the famous quote: "Be the change you wish to see in the world"; Richard decided to become his own hero and is using his trauma to make a difference by creating Punk Rock songs for kids with a Comic story as Darth Rirou. Richard also have a philosophical/comic show Coffee with weed, where he is a sit down philosopher; coalescing vapors of the human experience into viable and logical comprehension. All of it based on Richard's true story something he calls "Iron life". Richard also wrote a book about his journey that will come out sometime in 2021 along with his first album.

"to be strong is to exceed yourself in all levels: mind, body and soul!" Darth Rirou

Punkaste TV is the behind the scenes of Rock-it-ology TV and Spirituality Rocks Comic e-books.